I left my studio, my home, my job, New York, the USA in September 2017 to spend a sabbatical year in France. The aim was to leave the familiar and become a foreigner in Paris, to work in media less familiar to me and to become a student again. In my small apartment in the 11th Arrondissement, I eked out a studio in the corner. This required that I use materials and techniques that would neither damage the room nor compromise my living situation. For me, limitations of this sort induce creativity. After having just before completed a large installation, I had to adapt my creative process to my physical surroundings and began making collages. Tarlatan gauze used in a printmaking studio where I had begun to work intrigued me and became the primary material for the series that unfolded. Along with the gauze, I used other familiar materials: graphite, charcoal, acrylic paint and matte medium.

This creative process allowed me to make three separate, but related, series, shown below.
S A B B A T I Q U E 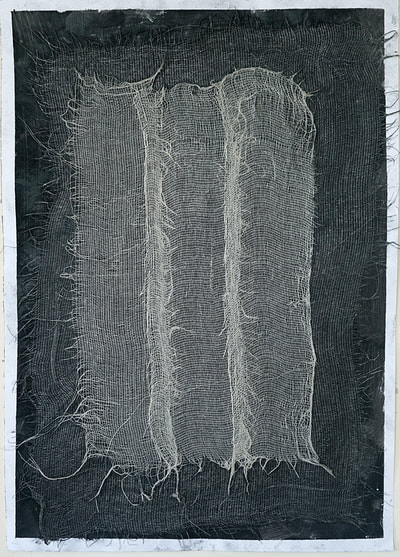 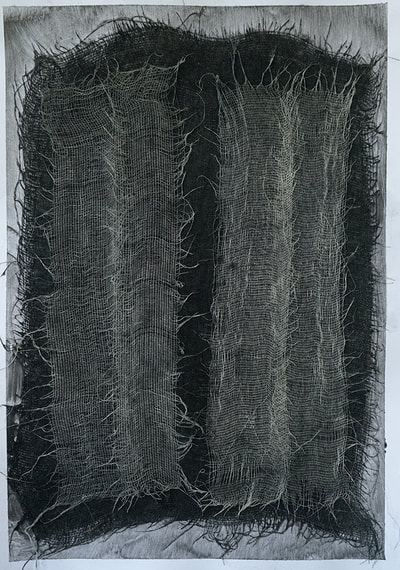 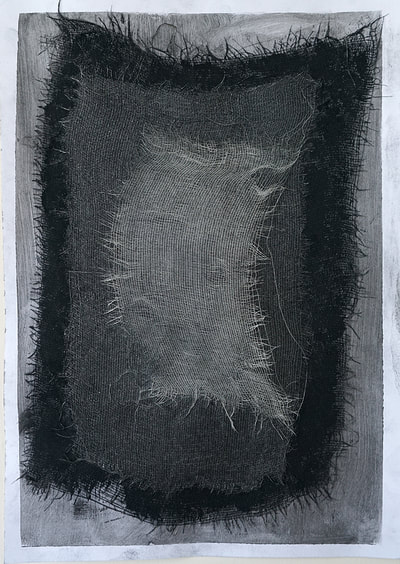 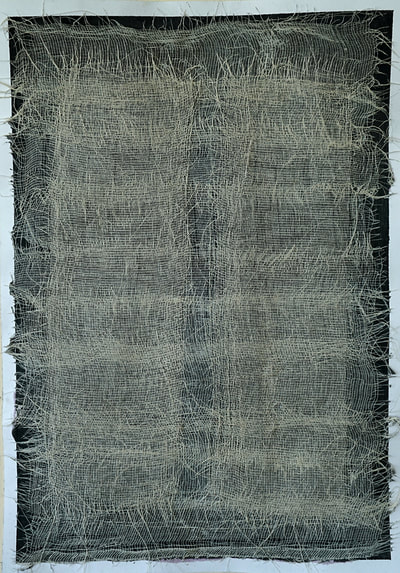 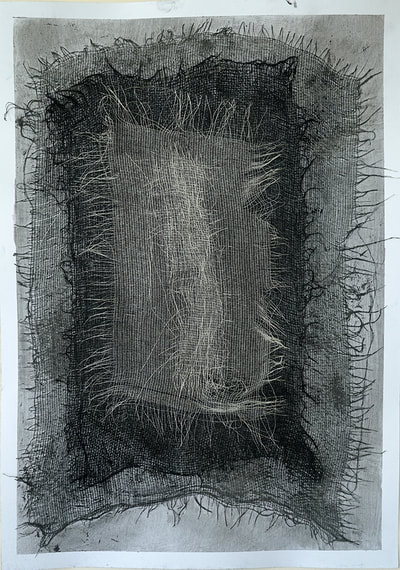 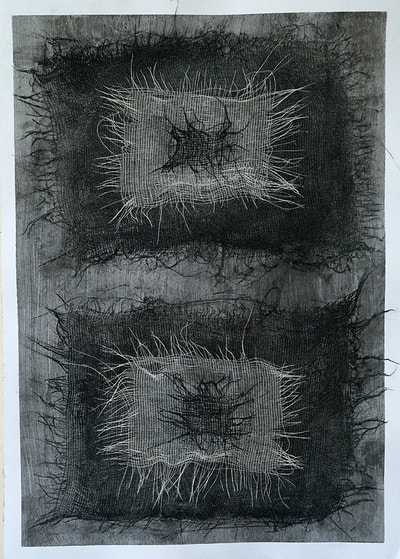 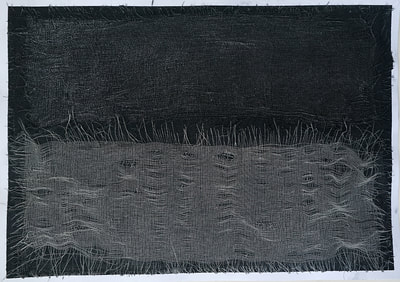 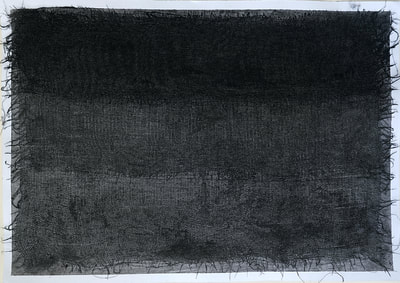 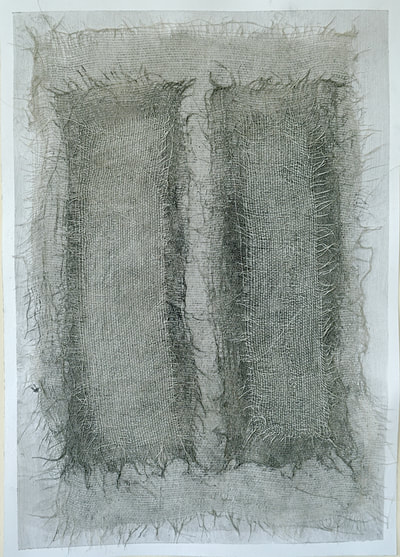 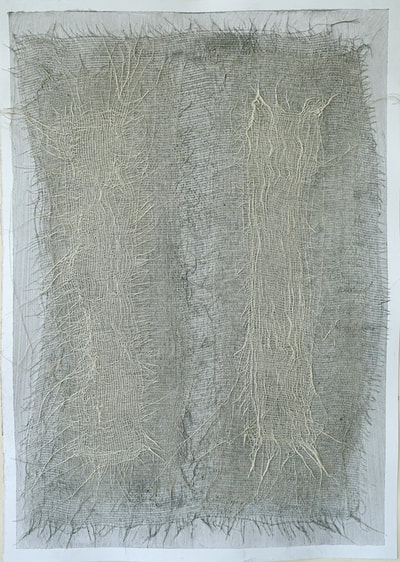 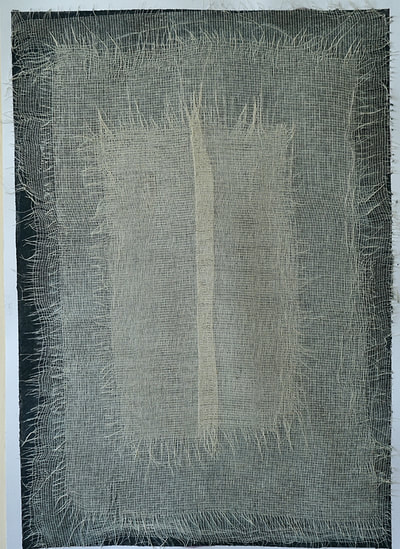 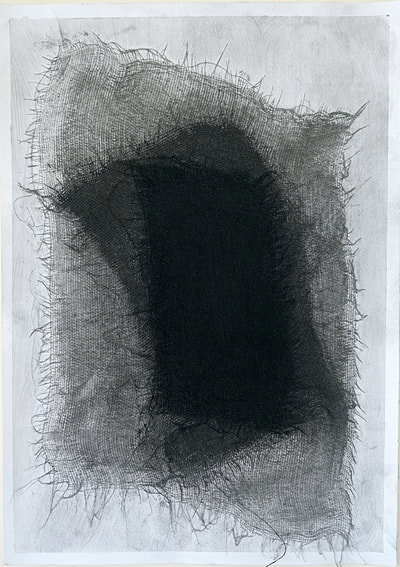 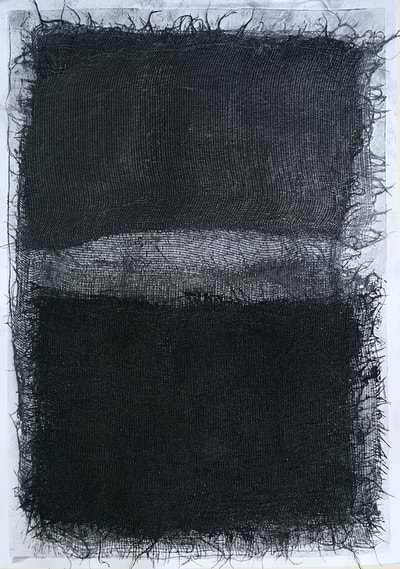 This series developed during the dark days of winter when nights are sixteen hours long and Paris turns into a black and white scene: gray skies, black leafless trees, off-white buildings.  Days would pass without seeing the sun. Color retreats indoors and Parisians follow. Used to a colder but sunnier winter in New York, and being seasonally affected, these conditions might have sent me into despondency, but I instead used the nuanced world of dim light and grays to create these works. They could have only been done in Paris, in winter, from my perch of a studio
G A M E S  E N D 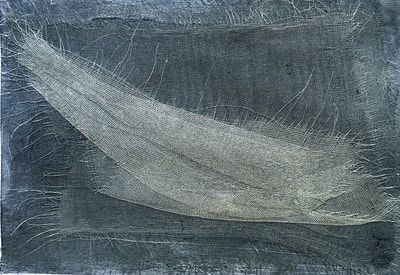 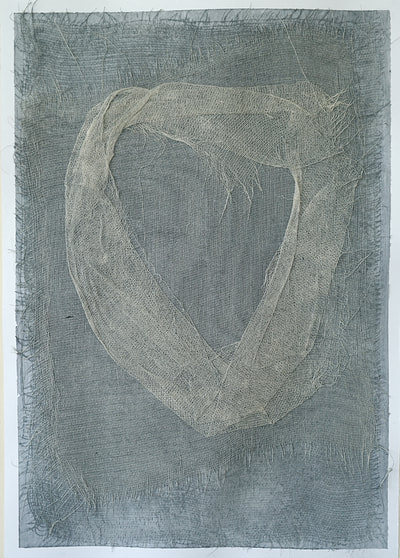 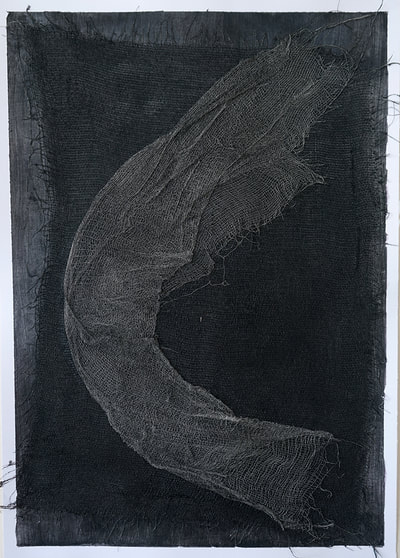 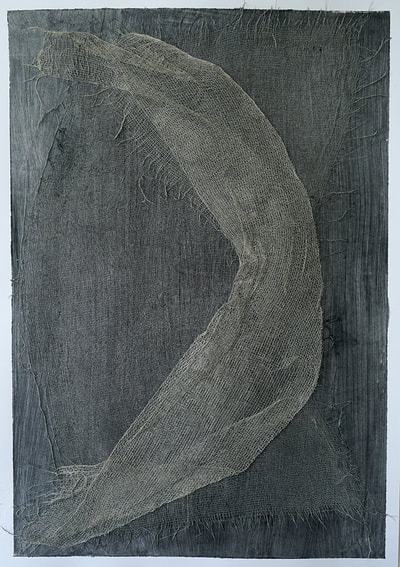 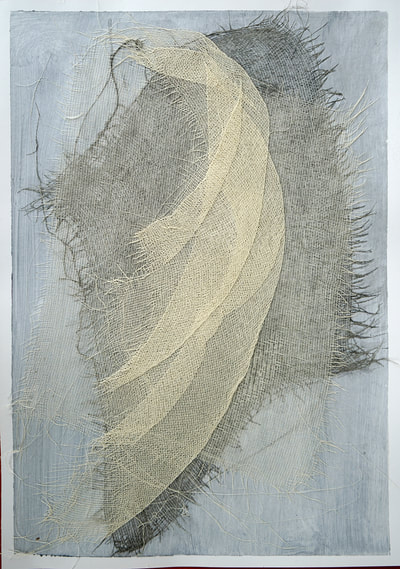 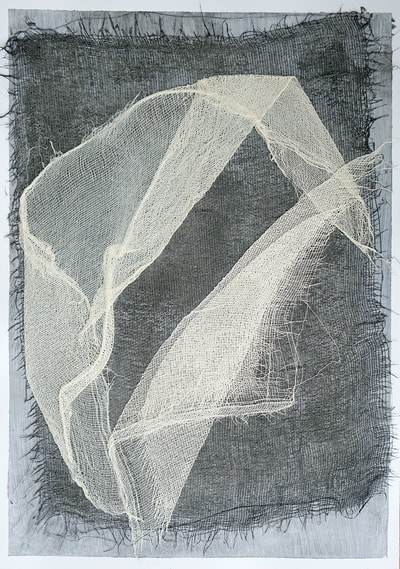 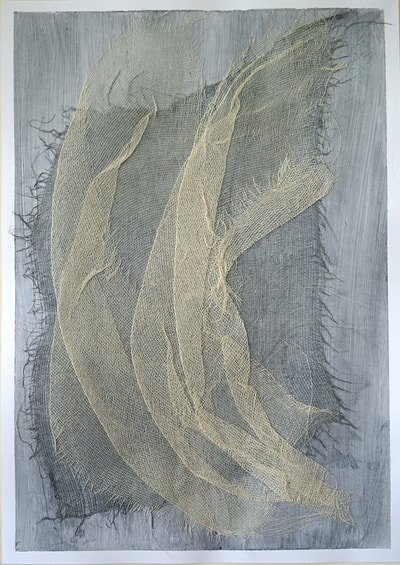 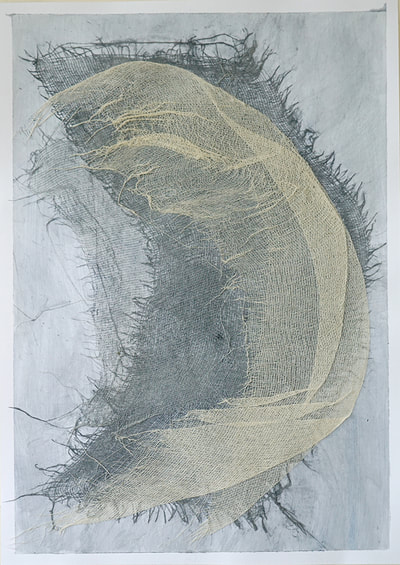 Game’s End is a series based on the blindfold, and everything it represents. In this age when the American president is more of a game player than a sage leader, the blindfold becomes a contemporary symbol. The blindfold is a familiar image from Pieter Bruegel the Elder’s celebrated Children’s Games and the games of courtship and seduction portrayed in the work of Jean-Honoré Fragonard and Antoine Watteau to more decadent S&M pictures captured in contemporary photography. The blindfold is used in games around the world, including countless forms of blind-man’s buff, blindfold chess in Russia, the blindfold for the Mexican piñata, and blindfold drawing.  The blindfold is an attribute of Roman goddess Fortuna. But the blindfold has a more ominous side: the intangible self-imposed blindfold of ignorance, or the blindfold warn by a prisoner before execution. The title of the series, Game’s End, suggests the end of the game, the end of ignorance (and subsequent search for truth, liberty) and more.
D A N S E  D U  F U T U R 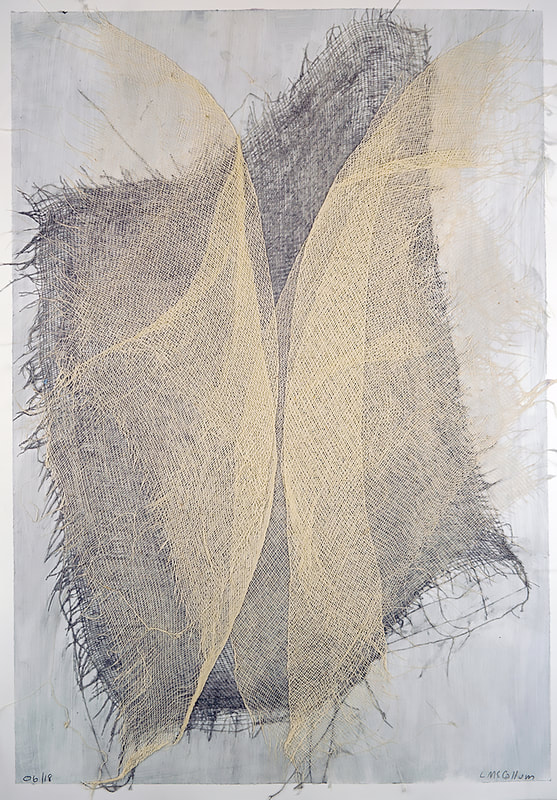 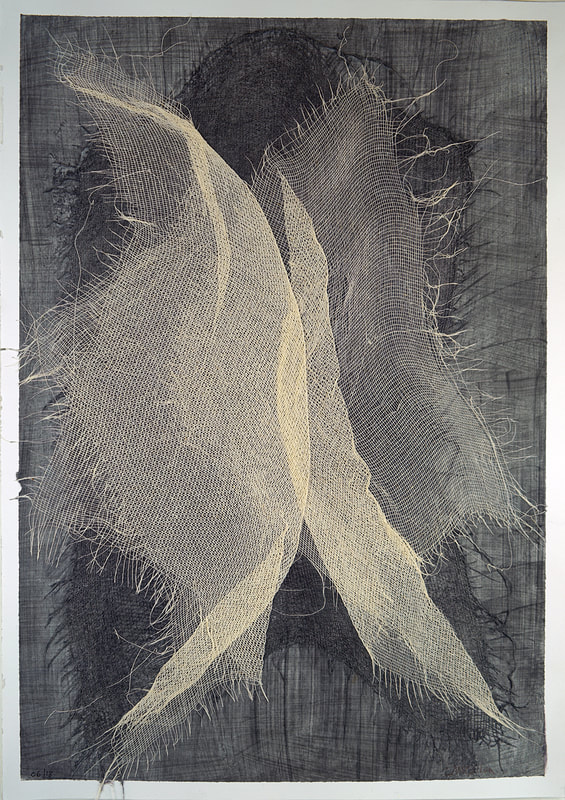 These works represent, among other things, the“dance of life”and how we must learn it as a balanced duet. Issues of inequity can only be addressed by all working together. Women alone cannot confront ingrained sexism; men must be equally involved. These works are ones of hope, of the future in a post #MeToo era, where there is no longer income inequity in workplace or labor inequity at home; where we need neither a museum of women’s art because art by women in traditional museums will be shown as much as art by men, nor a woman’s history month because they will be as celebrated as their male counterparts. Much progress has been made since my childhood, but we have not reached that parity. This future demands much work now, from both sides, with the aim of dancing to the same rhythm of ideas.
Untitled (Paris 7_1.18), 2018 (detail)